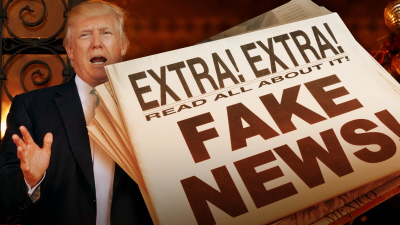 Let’s be honest: fake news is as old as campfires. Tales about killing a dragon, cutting off Hydra’s heads, or about a neighbour who cast a spell on my goat, are surely older than written history. We can say with some confidence that literary fiction is second nature for the third chimpanzee. Tales about diverse miracles were told in order to obtain sexual benefits, material profits or political power. And it worked because the human mind loves far-fetched stories, because it has a tendency to be confirmed in its prejudices, and because critical thinking requires overcoming fear of what others might say.

Historians have already written a few dozen books about the origins of fake news, and the current outrage in journalistic circles seems to be a knee-jerk reaction. Journalistic circles are fully aware of the high levels of fake news in the media, although individual editorial offices claim (probably in good faith) that it is others who produce fake news, done either for profit or because they belong to a different and therefore immoral political camp.

“Fake news” in all its English beauty (another English phrase which has slunk into the Polish language) is now a part of journalese and so, starting on with the news in the morning I ran smack into the information that “Ziemiec writes about fake news. Guess whether he remembered about news he himself broadcast.” Of course, to say that Ziemiec had borne false witness against his neighbour and now, forgetting about the beam in his own eye he screams the house down about the mote in his brother’s eye, could evoke some inappropriate associations, but to perform an overhead smash with fake news is like waving a fashionable scarf.

In the Soviet Union it was sometimes said that you couldn’t believe anything until Pravda published a denial. This approach was methodologically somewhat flawed but reflected a popular opinion among dissidents that this party media outlet was a generator of fake news.

We measure the fakiness of a fake by studying the factor of its deviation from reality. As is commonly known it is not always the truth that a fisherman who claims that he caught a “huuuge” fish in reality didn’t catch any fish. He could also have caught a fish not worth mentioning.

When the deviation from reality is an element of ideological identity, it can assume a standard value. Fake news about the 2010 air disaster in Smolensk, for example, assumes different forms, but it basically rules out the possibility that it was an accident caused by a bad decision to try to land in weather conditions in which, as professional pilots say unanimously, no reasonable person would even think of attempting to land.

It can be difficult to draw a firm line between them. Conspiracy theories may be the product of black propaganda and may function in the societal consciousness for decades or even centuries, even when the source no longer exists. (A classic example here is The Protocols of the Elders of Zion, fabricated by the tsarist Okhrana.)

A good piece of fake news, like a good caricature, appeals to deeply ingrained prejudices and stereotypes. It is thus well known that the false news story that Israeli medics went to help on Haiti because they were harvesting transplant organs from the victims sold better than other stories for the simple reason that the idea of a Jew killing Christian children for matzos belonged to fake news that was spread for centuries and was used as a tool to strengthen religious ties.

News stories about Jews may not be the most numerous, but they are among the most popular, and in the analysis of news bad or good but always false[1]they deserve a special place because they show very clearly both the deep need and never ending demand to have a group of people about which any unbelievable story will be recognized as a likely or even true story.

In regard to false news an interesting place is occupied by Holocaust denial. Most Holocaust deniers are found in the Muslim world, where the highest political and religious authorities are capable of declaring in one breath that there was no Holocaust, that Hitler did a good job, and that the real Holocaust is yet to come from Muslim hands because the Jews are behaving like Nazis and organizing a Holocaust of Palestinians.

Writing about the sudden and unexpected fashion of discussing false news, the American legal authority Alan Dershowitz gives some thought to the problem of where the line is between false news and controversial opinions, where the facts are true but interpretations may be biased.

Freedom of speech and the open marketplace of ideas are not a guarantee that truth, justice or morality will prevail. The most that can be said is that freedom of expression is less worse than its alternatives such as governmental censorship, official truth squads or shutting down the marketplace of ideas. Like democracy itself, untrammeled freedom to express hateful and dangerous lies may be the “worst” policy – except for all the others that have been tried over time.

Perhaps in post-Communist countries we should have remembered it better, but the fresh breeze of freedom seems to be tempting too many with the pornography of party Pravda (that is, “truth”).

Finding a person who has never repeated an untrue story would most probably border on a miracle. Not because we all like to tell incredible stories but because we can all fall into a trap and we sincerely believe in what we imagined or in what we were told. My father taught me that life deceives everybody, that the fact that we believed in a piece of nonsense is not a problem, but the real problem is to cowardly award ourselves hero medals when we already know that we’ve made an idiot of ourselves.

¹This is an allusion to the slogan of Radio Free Europe in Communist times: “We broadcast news, bad or good but always true”.