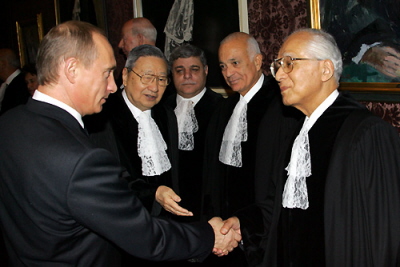 Al-Arabi, as Judge of the UN International Court of Justice, welcomes Vladimir Putin

A constant battle for peace is taking place. France proposed another peace initiative and immediately gained the full support of the Arab League. The League’s Secretary-General gave this support during a meeting of Arab foreign affairs ministers in Cairo where he stated, inter alia, that “Israel is the last bastion of fascism, colonialism and racial discrimination in the world”.

Interesting. You could say that the Arab League, established in 1954, has become very much more humanitarian and diplomatic than it was in the beginning. The first Secretary-General of this organization, Azzam Pasha, in an interview in October 1947 for the Egyptian daily Akhbar al-Yom, said that the war with the Jews will be “a war of extermination and momentous massacre which will be spoken of like the Mongolian massacre and the Crusades.” When an immediate massacre failed to materialize the Arab League decided to divide it into installments.

But before that, on the day of the proclamation of Israel’s independence, the Arab League announced that its forces had invaded Israel. Egypt’s Foreign Minister had sent a telegram to the UN Security Council: “Egyptian armed forces have started to enter Palestine to establish security and order”. The Arab League then had six members, and the armies of all the members jointly took part in this aggression.

Nabil al-Arabi is the sixth Secretary-General of the Arab League. He is deeply committed to the traditions of this organization which today has 22 member states with a total population of 350 million. Looking at the history of the Arab League (older than the European Union) it’s difficult not to get an impression that the fight with Jews is practically the only aim of this organization. All its other achievements are modest, to put it mildly, but in this field three full-blown wars (lost) and a constant hybrid warfare are genuine organizational successes.

The current Secretary-General of the Arab League is a lawyer, educated in Cairo and the U.S., and he was the legal adviser to the Egyptian delegation at Camp David. He was Egypt’s Permanent Representative to the United Nations in New York, Vice-President of the UN General Assembly, and he has held important and honorable posts in diverse international bodies. He was (after Mubarak was deposed) the Foreign Minister of Egypt.

Since 2011 he has been the Secretary-General of the Arab League. He started his work in this capacity with a statement that the Egypt-Israel peace treaty of 1979 was not sacred and could be annulled if one of the sides breached the treaty. Remember that those were the first months of the Arab Spring. Mubarak’s government was overthrown in January. The importance of the Muslim Brotherhood grew rapidly, and it had never accepted the treaty concluded by President Sadat (and was responsible for his assassination).

The Arab League has had a long tradition based on a central credo that the existence of Israel was a threat to the existence of the Arab nation. This conviction was at the bottom of a decision voted for at a summit of the Arab League’s states in January 1964 to reverse the course of the Jordan’s tributaries in Syria and Lebanon and thereby radically reduce the amount of water available for the Israelis (as well as Arabs living on the both sides of the Jordan River).

That same year the Arab League established the Palestinian Liberation Organization, which was supposed to conduct a permanent hybrid warfare. (Of course, establishing a Palestinian state on the territory of Judea and Samaria, occupied at that time by Jordan, was not on the agenda.) 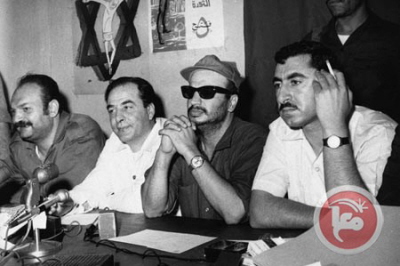 Fighters for freedom and democracy. PLO Chairman Arafat (in the middle) at a press conference in Jordan

Also the 1967 war was prepared by the Arab League. The dramatic defeat of the joint Arab armies was acknowledged at the famous Arab summit in August 1967 in Khartoum in the resolution of three “No’s” – no to peace with Israel; no to the right of Israel to exist; no to negotiations with Israel. The resolution recognized the Palestinians’ right to all of Palestine (which by then meant the area of the former British Mandate minus Jordan).

After Egyptian President Anwar Sadat signed the peace treaty with Israel, Egypt was excluded from the Arab League for eight years and its readmission didn’t mean recognition of Israel or acceptance of any efforts towards peace with Israel.

In February 2016 the current Secretary-General, after a few months of “knife Intifada”, called Palestinians to “civil disobedience” and to support the BDS movement. The former (in spite of its grotesque reference to Gandhi in this context) is difficult to treat as anything else than a call to terrorism; the latter is interesting insofar as Al-Arabi had repeatedly said that peace negotiations were a road to nowhere.

The Secretary-General knows very well that his words will not be met with any protests or even interest from the western world. The Arab League not only never protested against successive intifadas but, like now, consistently presents killed or wounded terrorists as victims and never condemns the acts of Palestinian terror. In the same speech Al-Arabi talked about “indiscriminate killing of civilians” which started with the attack on the King David Hotel, committed by a clandestine Jewish organization.

In the opinion of this former judge of the International Court of Justice, Israel is the last bastion of fascism, colonialism and racial discrimination. The facts that Mein Kampf  is a longstanding best seller in Arab countries, that Israeli Arabs have more rights than Arabs in any of the Arab League’s member states, and that Israeli “colonies” consist of a few thousand houses on the disputed territory which was retaken in a war of defense after the aggression by the Arab League, do not seem an argument for this internationally famous lawyer.

From the political viewpoint he is probably right. After all, the Secretary-General of the Arab League has behind him not only 22 Arab states and the other Muslim states but also the rest of the world as well. The policy this organization is conducting is also financed by the United Nations. Palestinian terrorism starts in schools run by UNRWA.

In an excellent book by Piotr Ibrahim Kalwas, Egipt – haram, halal, an elderly Egyptian professor tells about the long history of the Arab love affair with Nazism and about the contemporary Arab obsession with anti-Semitism, about envy and the inability to get out of the vicious circle when irrational hatred dominates the mentality of the ruling class and the people.

A Syrian refugee who is living in Turkey tells about it differently. Abaut Dandachi is a manager of an IT project but today he is known to the world as a Syrian dissident, the author of books and a blog, From Homs to Istambul. Dandachi writes that it’s not Islamophobia that keeps him up at night, it’s anti-Semitism. He finds fascism in different places than the Secretary-General of the Arab League. His article about anti-Semitism starts with an illustration captioned:

„The three stages of fascism in all its guises; first they target the Jews, then they do away with the Jews. Before you know it they are painting “N” on the confiscated properties of other groups and minorities. A world where Jews can be persecuted out of liberal Western societies they have lived in for generations is a world that is unsafe for any minority anywhere in the world, including refugees such as myself.” 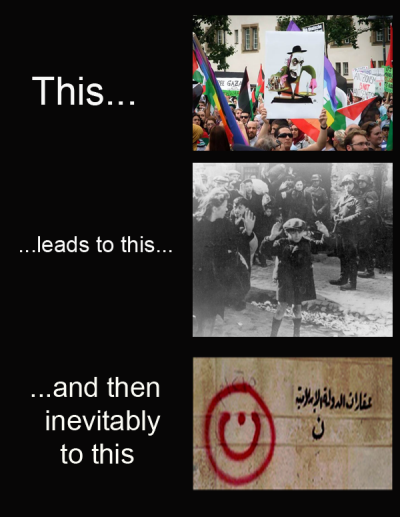 In an interview in November 2015 Abaut Dandachi explained why he was convinced that it was impossible to eliminate extremism exclusively by police operations. This struggle requires daily confrontations with extremism, and extremism invariably starts with anti-Semitism.

“Europe missed the signs.  Extremism always starts with anti-Semitism.  It’s not a problem just for the Jews.  It’s a symptom of something much worse to come and frankly, Europe’s response to the growth of anti-Semitism has been appalling. [...]I’ve seen how a society becomes extremist. Grievances that initially could be handled rationally get hijacked by people with an extremist agenda, who then fan the flames of tension and hatred until the middle ground is burned away and everyone is only left with the extremist sides.  In the end, ordinary people from both sides feel that they have to join the extremists for their own self-preservation.  It should never be allowed to get to that point.”

Today ISIS is the source of the greatest fears, but according to Dandachi even if ISIS were vanquished today its ideology has already poisoned minds, and the idea of a world caliphate is popular -  like Nazism, which was finally vanquished, but its ideology persists and still has many followers.

„Out of the blue, the papers and the airways are filled with the word “anti-Semitism”. It is all about us. Again. Why? Have I missed something? Did Israel attack a neighbour in response to rocket fire? No. Have Jews attacked, surrounded, blown up, beheaded, caged, destroyed, proselytised, rounded up, raped or hijacked anybody? No. Have any recent terrorist attacks been perpetrated by Jewish groups? No. Have we vowed in our constitutions, on our websites and on social media to destroy any one of the Muslim states or Catholic or Christian countries of the world, or urged young Jews to stab members of other faiths? Have we flown planes into tower blocks or trained suicide bombers to blow themselves up in marketplaces, on buses, and in hospitals? No. ”

The British actress doesn’t find the answer to the question “Why?”. Indirectly (and earlier in time) the answer was given by a compatriot of the Secretary-General of the Arab League,  an Egyptian dissident living in Germany, Hamed Abdel-Samad, a writer an political scientist who in March 2016 gave a lecture entitled “Islamic Fascism and the Jews”. He says that there were two books he encountered everywhere Mein Kampf  and The Protocols of the Elders of Zion.

"Can you imagine a religion whose adherents pray every day, reciting the most important chapter in their holy book, which consists of curses towards others? Have you ever asked yourself what the verse 'those who incur wrath and those who have gone astray' means? What does it mean to pray and curse others?”

Abdel-Samad asks rhetorically whether he is paid by Mossad. And he answers: “No. I'm saying this because this hatred is poisoning us. We have wasted vast efforts on this hatred.”

(You can watch his lecture on this video: http://www.memritv.org/clip/en/5457.htm)

The Secretary General of the Arab League, Nabil Al-Arabi, claims that “Israel is the last bastion of fascism, colonialism and racial discrimination”. He is a highly respected politician; many in Europe and America listen carefully to what he says. Millions fervently want to believe that he is speaking the truth, the whole truth and nothing but the truth.