The Nazis and The Final Solution 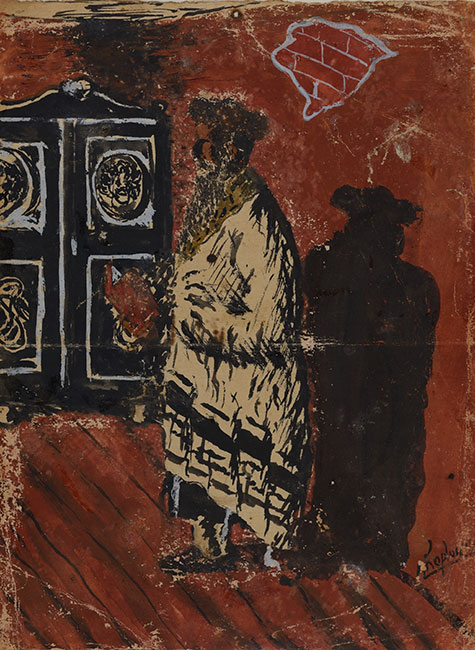 Wreaths have been laid and candles lit at Auschwitz to mark the 70th anniversary of its liberation. Abramek couldn’t be there.
A SMALL TRAGEDY

At 13, Abramek was writing bright and beautiful poetry, far in advance of his years. He, and his words, came to an end in Auschwitz. By chance, some small memory of him was salvaged.

He was Abraham Koplowicz, known to all as “Abramek,” blond and graced with those very features which Hitler’s race theories espoused as the epitome of Aryanism. But since Abramek was Jewish, he was eventually deprived of life and very nearly disappeared into the abyss of oblivion, like so many Jewish children who perished in the Holocaust. It was by chance that some small memory of him was salvaged.

The Lodz Ghetto, with 165,000 Jews incarcerated in a disease-ridden, four-square-kilometer area, was unique. The local Judenrat set up a system of ghetto industries, run by forced Jewish labor, to serve the German army in return for scant food rations. By 1943, 119 such factories were in operation, employing about 90 percent of the Jews. The necessity of keeping these factories staffed meant that the ghetto was spared from annihilation until most of Poland’s other Jewish communities had already been wiped out – until the final “mopping up” operations at the end of 1944. It was then that Abramek Koplowicz and his family were sent to Auschwitz, in the last transport to that death camp from Lodz.

When the Koplowicz family was taken to Auschwitz, the mother, Yochet Gittel, was immediately sent to the gas chamber. The father and 14-year-old Abramek were sent to forced labor. But as he left for work, Mendel Koplowicz left his son in the barrack in order to protect him from the ordeal. Upon his return, he found it empty. The Germans had come and sent all those inside to death.

The man who saved Abramek’s name from obliteration was someone who didn’t know him in person, but whom fate would later turn into Abramek’s step-brother. He is Eliezer “Lolek” Grynfeld, today a retired comptroller at the Ta’as munitions industries in Israel and a volunteer lecturer on the Holocaust. Grynfeld lives in an idyllic little house in Holon, surrounded by the lush greenery and flowers of a well-tended garden.

The pastoral present notwithstanding, Grynfeld’s youth was lost in the same Lodz Ghetto where Abramek’s childhood was cut short.

Abramek’s father, Mendel Koplowicz, labored at a workshop producing cardboard boxes for the Germans. An ordained rabbi, he became a confirmed atheist after reading many secular philosophy books. Abramek worked at a shoe-making workshop, occasionally showing up at his father’s workshop to entertain the laborers by reciting poetry and satirical skits in verse. The handsome boy delighted his listeners, who unanimously agreed that he was a genius. One of those who heard him was Haya Grynfeld, Lolek’s mother and Mendel Koplowicz’s co-worker.

In 1946, Mendel Koplowicz wed Haya Grynfeld. Grynfeld describes his stepfather as “a taciturn man. It was rare to ever hear him mention the son he lost. I knew that he had gone back to their Ghetto home in Lodz after the war and that in the attic he had found a painting Abramek had done. It was of an old Jew in a tallit (prayer shawl) in front of the holy ark. It was realistic and far beyond what could be expected of a little boy.

When after the death of his step-father Grynfeld finally brought himself to go through the couple’s things, he discovered an old Polish school composition book. The carefully-illustrated title page declared that it belonged to A. Koplowicz. The title itself was Utwory-Wlasne (Polish for “private creations”). At the bottom of the page, over an ink drawing of barricaded dark buildings, was the inscription “Litzmannstadt [the German name for Lodz] Ghetto.” The year 1943 was designated in large numerals.

***
Auschwitz survivors visited the Nazi concentration camp a day ahead of the 70th anniversary of its liberation. Abramek couldn’t be there. Małgorzata Koraszewska and Sarah Lawson translated some of his poems into English:

When I am twenty years of age,

I will burst forth from this cage

And begin to see our splendid Earth

For the first time since my birth!

In my motorized bird I’ll soar so high

Above the world, up in the sky,

Over rivers and the seas,

With such stupefying ease,

With my brother wind and sister cloud, I’ll

Marvel at the Euphrates and the Nile;

The goddess Isis ruled the land that links

The Pyramids and the massive Sphynx.

I will glide above Niagara Falls,

And sunbathe where the Sahara calls;

If I want to escape the scorching heat,

I will fly up north to an Arctic retreat.

I will top the cloudy peaks of Tibetan fame

And survey the fabled land whence the Magi came.

From the Island of Kangaroos

I’ll take my time and cruise

To the ruins of Pompeii

At the edge of Naples Bay,

I’ll continue to the Holy Land, then seek

The home of Homer, the celebrated Greek.

More and more astonished will I grow

At the beauty of the Earth below.

In all my travelling I’ll be twinned

With my siblings, cloud and wind.

It moaned and it droned,

It howled and it groaned,

With a terrible voice, woo-hoo!

Over meadows and grasses,

It raced and rushed its way through.

The gale puffs out its cheeks

And scatters debris all over the place.

A swallow is heard to say

As she hides in the hay

That the world is too frightening to face.

And the terrible gale

With a deafening wail

With a deafening wail

It hit hill and dale

And never relinquished its hold.

Went down at a stroke

And their leaves blew away.

At a town or a farm

It caused damage and harm

And left behind grief and dismay.

They all sound perplexed.

All forms of life,

The swallow and his wife,

Are wondering what will come next.

It whooshed towards a dwelling

And roared at the top of its voice.

Indoors the children could hear,

So clung to grandpa in fear—

Sleeping was never a choice.

The wind is biting and keen

And planning a change of scene;

Raging and roaring it ran

Over meadows and grasses,

It dashes on as fast as it can.

The clock is hanging on the wall

Slowly measuring out the time.

And the quarter hour provokes a chime.

The hands rotate by degrees

On the white face of the clock.

That connect and then release—

Even when a late hour rings,

Sometimes a minute seems to last—

To go on for an age.

But it may also go whizzing past

At a speed too fast to gauge.

And the clock is hanging on the wall

Slowly measuring out the time.

And the quarter hour provokes a chime.

Bereft of all he had,

A beggar shambles through the city streets.

Forgotten and ignored by everyone he meets.

His choices were as poor as he;

With his needs unspoken,

He is homeless and dejected

And he leads a roaming life.

While at home a mother’s left to hold

Her children close against the cold,

Weeping the tears of a lonely wife.

He comes to a town

Dire poverty is far from the fashion.

With a beautiful roof line,

But never a hint of compassion.

He knocks on a door—

Breakfast is on the table,

Plenty of bread and butter.

Give something to a starving man.”

The householder glared from his place

And  hit the table with his fist.

And slammed the door in his face.

So he suffered from not being fed

Nor having a roof over his head.

He gave his soul to God to keep.

On a cold autumn night

Resigned to his plight,

He sat down and soon fell asleep.

In a peaceful hamlet Berele and his parents led contented lives

Mobilization! War has been declared!

Will they take her son? Deep in her soul the mother’s scared.

Suddenly her worst fears come true; Berele is called up to fight.

He bids his parents farewell. His throat feels strangely tight.

He tears himself away from the familiar domestic scene,

For Berele is a man now, not a boy; he’s turned eighteen.

Berele fights valiantly in the dark fog of war

And is promoted to a member of the officer corps.

Now a battle is raging, soldiers are dying;

Thousands have fallen, but the flag is still flying.

But in Berele’s heart he longs for home and mum and dad.

His homesick longing must be that pain in his chest,

But no, it’s a bayonet. The bullets fly—he’s going west.

He is trampled in the mud; he cannot rise.

“Goodbye mother and dad,” he whispers as he dies.

Back home in the hamlet, after many years hope still makes them run

To every man coming up the road; he could be their beloved son!

But it’s always a stranger. “Time heals all wounds”, but it hasn’t done.

The father dies from longing for his son, but the mother will not rest.

In her dreams she kisses him tenderly and clasps him to her breast.