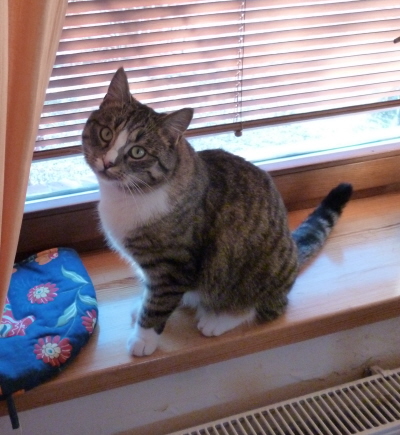 I want to tell you that I’ve read this book by Marcin Kruk, which you can download from “Listy”. I Accidentally clicked on the headline and when I started to read, I couldn’t stop. I will not tell you about the whole book, but I laughed out loud when one pupil bet another that he could convince the priest that a human being is also an ape. The bet was serious, so the girls were to be the jury. It turned out, however, that the jury was divided. Half decided that the priest was now convinced and half thought he wasn’t.
So the pupils asked the Polish teacher for the verdict, but she thought that both the bet itself and the argument about  the result were so interesting that the headmaster should be involved.

I have to admit that the pupil who claimed that he had made the priest agree that humans are apes used  quite a feline trick. In the religion lesson he said (probably falsely) that Polish archeologists in Iraq had discovered the clay out of which God had created the Australian platypus.

It’s easy to guess that the reactions of  the participants, including the priest, were just what the pupil expected. When the class (or maybe just part of the class— it was not precisely described) started to laugh, the priest exclaimed that they were a bunch of apes!

One of the girls on the jury said that the pupil who proposed the bet won because the priest confirmed that humans, or at least pupils, were apes, while another argued that the priest didn’t mean it literally but only metaphorically.

It is possible that the Polish teacher  favored the verdict that it was a metaphor rather than admitting that science was right, but the reader gets the impression that she wanted to make a monkey out of the headmaster (as it were) because she was somehow related to him. (I will not tell you how, because that would spoil the fun.)

Whichever way you look at it this, one  pat with my paw has cost me dearly because once I started reading I couldn’t stop until I found out who did it. (Of course, I’m not going to tell you and give away the plot, because if I did Marcin wouldn’t pet me for a month.)

I will tell Marcin myself what I think of him, because he should never play a trick like that on a cat.